Then there was Megan Pullman. She was a distant relative to the inventor of the Pullman Railroad Car. Something like a 3rd great, great cousin once removed. She took her name to heart. From the age of six onward she had people pull her finger (a juvenile prank which is followed by flatulence) and with the resulting, toot usually cemented their approval.

She was 26 and just a stunning looking woman by anyone’s standards. Devastating smile, long legs and arms, black hair, absolutely perfect brown eyes and a body that had been in vogue and appeared in Vogue magazine[1] for generations.

The first blast disintegrated her lower body. She had a full 30 seconds to comprehend and scream in horror at the pile of charred flesh that her upper torso landed on. Her still lovely arms and hands slid around in the goo and shards of blood covered bone trying to stay upright and not fall face-first into her own intestines.

With about ten seconds to go in her short life, she finally did slip and got a mouthful of her own gore when she tried to scream. The moment she opened her mouth, her lower jaw fell away not to mention her entire neck from the back forward.

It is truly amazing how much damage a human body can take and still feel. This was one of those times where it was much, much better not to feel. Unfortunately, her brain was comprehending the pain she was in until the very end.

Megan would be remembered if only for her physical attributes, which were on display in the December 2021 edition of Vogue magazine. That had been her one and only modeling gig, although she was in demand for months afterward with agencies tripping over each other to use her looks to make them rich.

She hadn’t liked the whole process and was philosophically opposed to the concept of “fashion."


[1]- The Vogue Factor: The Inside Story of Fashion's Most Illustrious Magazine By Kirstie Clements
Posted by Harry Kellogg III at 5:03 PM No comments:

Rich Delgado had just locked up the convenience store he owned on Lower Wacker. The location used to be a 7 – Eleven but when the market crashed in 2019, the corporation went with it. Rich picked up the property in the wake of the bankruptcy. He wasn’t going to be rich, but it kept him and his family in food, which was more than some could say in this day and age.

Rich was just thinking about how things were looking up for the little guy since the elections. It had taken several to rid the system of the corrupt bunch that had been put in office by a combination of gerrymandering,[1] the “Cross Check” computer program [2] and a bought-and-paid for US Supreme Court. [3]

For the last five seconds of his life, his eyes and brain functioned perfectly. He watched in terror as his body melted away until only his bones held him up. His head happened to be shielded by a huge metal sign in the shape of a tea kettle and that lasted 3.5 seconds before it too disintegrates. His head lasted another 1.5 seconds.

Five seconds was not enough time to feel any pain but enough for the visual. Most in the epicenter were spared the horror that Rich saw before his eyes melted, and head exploded.

Some victims of a nuclear blast leave behind a kind of shadow. Rich didn’t. Since his wife, children, brother and two sisters live within eight miles of the initial blast, in a matter of minutes no one left alive would remember Richard Delgado.

And that’s too bad. He was a nice guy.

[2] - The Best Democracy Money Can Buy: A Tale of Billionaires & Ballot Bandits - By Greg Palast

Posted by Harry Kellogg III at 1:14 PM No comments:

“Then, at 11:02am, the sky turned bright white. My siblings and I were knocked off our feet and violently slammed back into the bomb shelter. We had no idea what had happened.

As we sat there shell-shocked and confused, heavily injured burn victims came stumbling into the bomb shelter en masse. Their skin had peeled off their bodies and faces and hung limply down on the ground, in ribbons. Their hair was burnt down to a few measly centimeters from the scalp. Many of the victims collapsed as soon as they reached the bomb shelter entrance, forming a massive pile of contorted bodies. The stench and heat were unbearable.

My siblings and I were trapped in there for three days.

Finally, my grandfather found us, and we made our way back to our home. I will never forget the hellscape that awaited us. Half burnt bodies lay stiff on the ground, eye balls gleaming from their sockets. Cattle lay dead along the side of the road, their abdomens grotesquely large and swollen. Thousands of bodies bopped up and down the river, bloated and purplish from soaking up the water. ‘Wait! Wait!’ I pleaded, as my grandfather treaded a couple paces ahead of me. I was terrified of being left behind.”[1] 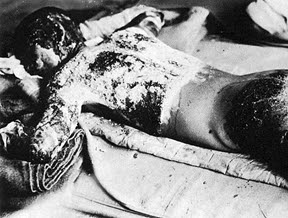 Posted by Harry Kellogg III at 4:25 PM No comments:


Akiko Takakura – Hiroshima
Ms. Takakura was less than 1000 yards from the epicenter of the first atomic fire storm
The morning of August 6, 1945

“The fingertips of those dead bodies caught fire, and the fire gradually spread over their entire bodies from their fingers.

A light gray liquid dripped down their hands, scorching their fingers. I, I was so shocked to know that fingers and bodies could be burned and deformed like that. I just couldn't believe it. It was horrible.

And looking at it, it was more than painful for me to think how the fingers were burned, hands and fingers that would hold babies or turn pages, they just, they just burned away.”[1]
***
[1] ­-  To Hell and Back: The Last Train from Hiroshima By Charles Pellegrino

Posted by Harry Kellogg III at 12:03 PM No comments:

Books by the same author

Harry Kellogg III
Cornucopia, WI - Wisconsin, United States
The last twenty years of my working career have been in Emergency Management on a Federal level. My final full-time position was on the National Incident Management Assistance Team West stationed in California. My concluding deployment was at the National Head Quarters in Washington where I spent countless hours planning and managing the effort to house 5,000 unaccompanied children. My previous assignment was working with the Center for Disease Control in Atlanta, where we helped control the spread of the Ebola virus. I've been in the trenches at the lowest level and been involved at the highest. I've watched events devolve into confusion because of petty office and national politics, revenge, and hubris. I’ve also organized and supported and witnessed, thousands of volunteers who spent their vacations gutting out and rebuilding flood-damaged homes. I've seen the worst of man and the best in times of stress. I’m a hurricane and flood survivor six times over. My point being, I’ve been around the block and walked in your shoes. Many things can and do go wrong while trying to bring order out of chaos. My hope is to mitigate a few of the challenges survivors face.